The Temple Mount A Background 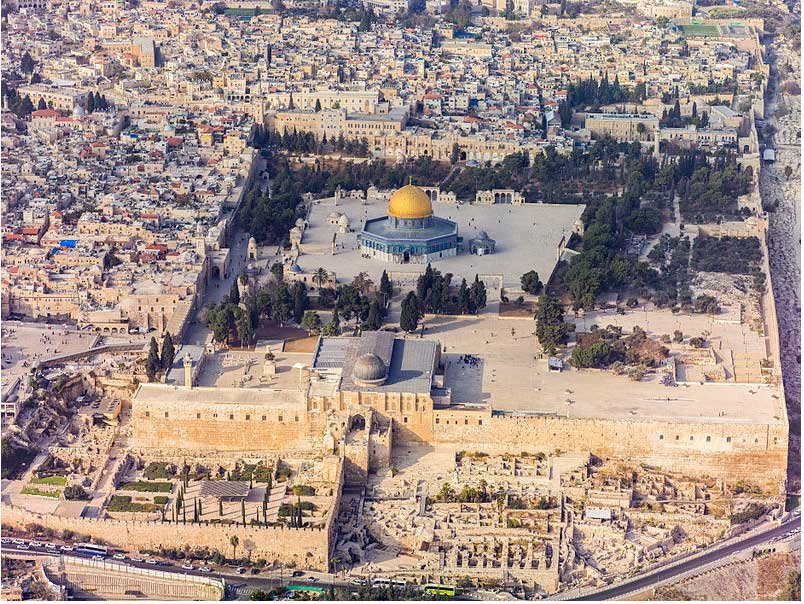 
The Temple Mount, the site where the Jewish First and Second Temples once stood, has been the site of the al-Aqsa Mosque since 705 CE. According to Muslim tradition the prophet Mohammed ascended to heaven from the the Temple Mount known to the Muslims as al-Haram ash-sarif. When Israel captured the Old City of Jerusalem during the Six Day war (50 years ago), a decision was made to allow the administration of the Temple Mount compound to remain in the hands of the Muslim Waqf; while Jewish prayer would take place in the plaza below — at what was known as “the Wailing Wall”, now renamed the “Western Wall” (whose stones were part of the retaining wall for the Temple Mount created in King Herod’s time (1st century BCE). Israel's decision to defer control over the Temple Mount compound was eased by the fact most leading rabbis at the time believed Jews should not ascend to that area, due to the fact that one could not be sure where the ancient Temple's “Holy of Holies” had been located (i. e. a place Jews were not permitted to visit.) In the years that followed since the 1967 war, an unwritten agreement, known as the “status quo”, maintains the delicate division of authority established over the Temple Mount compound. Under this agreement, the Waqf, which was controlled by Jordan, would administer the site and maintain order. Jews would be allowed to visit, but not pray, at the site. The status quo remained in place without serious difficulties until 1996, when construction on the site by the Waqf, and the opening of the adjacent Western Wall tunnel by the Israelis, created serious tensions and resulted in the abrogation of the long-standing agreement. At the same time, a campaign instigated by Sheik Raed Salah, head of the Northern Islamic Movement, who served at the time as mayor of Umm al-Fahm (an Arab Israeli town) that asserted, “Al-Aqsa is in danger” gained steam.

During the Second Intifadah (beginning in Sept. 2000) the status quo fell apart completely. For three years, Jews were not allowed to visit the Temple Mount site. In 2003, Israel unilaterally established a new status quo that permitted Jews to visit the compound. It should be noted that, concurrently, there had been a growing sub-group of religious Israelis who demanded the right to pray on the Temple Mount and refused to accept the restrictions set in place by the status quo. Two years ago, a mini “Intifada of Knives” broke out that spurred attacks in response to the cry — “al-Aqsa is in danger”. The tension over al-Aqsa two years ago was partially resolved by intensive diplomatic efforts achieved by then US Secretary of State John Kerry. The cry — “al-Aqsa is in danger” has been extremely effective for over nearly a century, in creating resistance to Jewish presence in Palestine. The slogan “al-Aqsa is in danger” was first used in 1928, as a catalyst to the riots that year; uprisings that ended centuries of Jewish presence in Hebron. Attempts to reach a new agreements — especially as related to security— have failed, despite the positive input of the Jordanians.