Capture of Ft Henry and Donelson

The Confederates did not have enough resources to defend Kentucky. General Johnson the Confederate commander requested reinforcements, but Richmond had none to spare. It did however, send General Beauregard. This however, ironically this seems to have had the opposite of the desired effect. It spurred General Halleck, the Union commander in the West to take action, something he was not quick to do. He sent General Grant and his naval assistant to investigate the western end of General Johnson's line. He discovered that Fort Henry on the Tennessee River was vulnerable. Grant landed his 12,000 men while Commander Foote, the naval commander sent his gunboats to pound fort. Before Grant could surround the fort, Brigadier General Lloyd Tilghman sent most his men from the fort toward Fort Donelson.

The navies bombardment was effective and Tilghman soon surrendered.

With Henry in Union hands Johnson decided that his position was untenable. He sent half of his troops, South out of Tennessee. The other half were sent to reinforce Fort Donelson. Over 16,000 Confederate troops were now in Fort Donelson. The Union attack on Fort Donelson started with an attack by four ironclads. The ironclads however, came too close to the fort and were hit and forced to withdraw. General Grants troops surrounded the Fort. The Confederate commander of the Fort was John Floyd, the second in command was General Gideon Pillow, neither were the Confederates outstanding generals. Their plan of action was to attack the federal lines on the right. The attack succeeded, and the federal line was broken. General Wallace brought reinforcements to hold the line, and Union ironclads resumed there bombardment of the fort. It probably would not have been enough, if it was not for an order given by General Pillow to return to the fort, thus throwing away the gains of the day. By nightfall it was clear that there could be no choice but to surrender. Floyd and Pillow did not wish to be taken prisoners however, so they left the fort in the middle of the night. The commander of the confederate cavalry troops refused to surrender, so he led cavalry troops through the union lines and out of the fort. In the morning the new Confederate commander General Bruckner- who had once lent General Grant money, asked for surrender terms. Grant answered; No terms except unconditional and immediate surrender can be accepted. I propose to move immediately upon your works." Bruckner surrendered. The North had a new hero "unconditional surrender Grant" and Tennessee including Nashville were open the Union.

Confederate forces were forced to begin withdrawing from Nashville. The confederates removed as many supplies as they could. On the evening of February 24th, the first Union troops arrived in Nashville. The first confederate capital had fallen.

Grant on the Battle

This illustration from Harpers Weekly from March 17, 1862 is captioned:Position of taylor's and Mcallister's batteries during the battle at fort donelson.—sketched by mr. Alexander simplo

This illustration from Harpers Weekly from March 17, 1862 is captioned:The Attack Of The Second Iowa Regiment On The Rebel Batteries At Fort Donelson.—sketched By Mr. Alexander Simplot 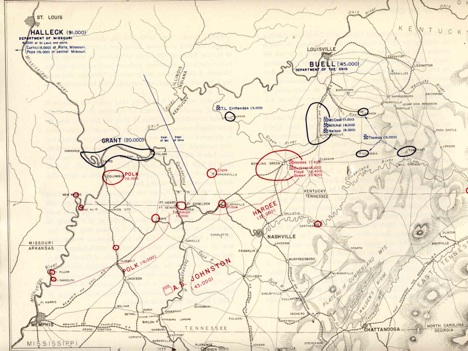 This is a map of the Henry and Donelson Campaign depicting the situation on morning February 14, 1862.

This illustration from Harpers Weekly from March 17, 1862 is captioned:The Gun-boat Attack On The Water Batteries At Fort Donelson.—sketched By Mr. Alexander Simplotfo 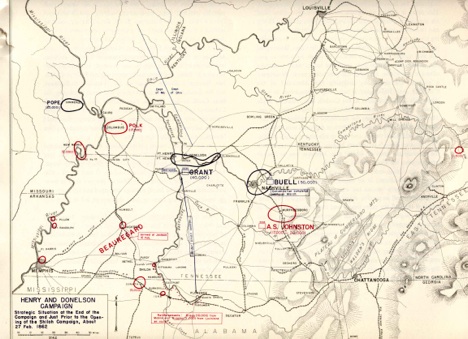 This is a map of the Henry and Donelson Campaign depicting the situation at noon February 15th. 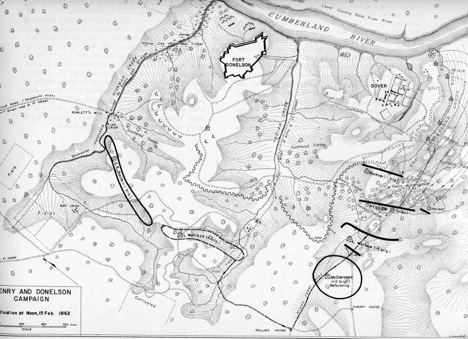 Map Situation Night 14-15 February ?This is a map of the Henry and Donelson Campaign depicting the situation on the night of February 14-15 that shows the investment completed. 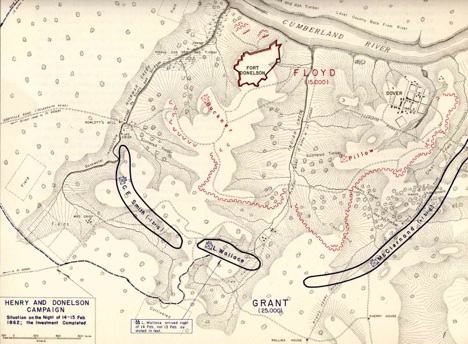 This is a map of the Henry and Donelson Campaign depicting the situation on February 14, 1862.