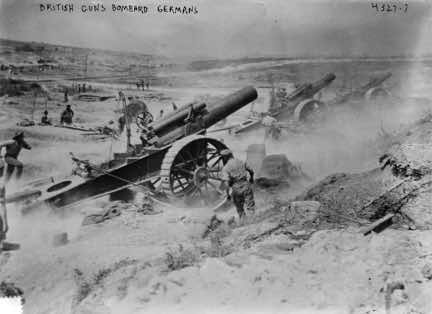 With the outbreak of World War I, President Wilson pledged that the United States would remain neutral in the war in Europe; a war that started by accident, but whose roots lay in the German-British rivalry, as well as a number of regional disputes.

The actual start of World War I came as a surprise in the United States. President Wilson immediately stated that the United States would remain neutral. Wilson hoped that the US could act as a mediator to bring about a ceasefire. Wilson offered his service as a mediator, but while initially, the Allies were interested in a truce, the Germans whose initial offensive was successful were not. As the war progressed American sympathies for the Allies (British and French) grew.

The effect of the war upon the United States will depend upon what American citizens say and do. Every man who really loves America will act and speak in the true spirit of neutrality, which is the spirit of impartiality and fairness and friendliness to all concerned. The spirit of the nation in this critical matter will be determined largely by what individuals and society and those gathered in public meetings do and say, upon what newspapers and magazines contain, upon what ministers utter in their pulpits, and men proclaim as their opinions upon the street.

The people of the United States are drawn from many nations, and chiefly from the nations now at war. It is natural and inevitable that there should be the utmost variety of sympathy and desire among them with regard to the issues and circumstances of the conflict. Some will wish one nation, others another, to succeed in the momentous struggle. It will be easy to excite passion and difficult to allay it. Those responsible for exciting it will assume a heavy responsibility, responsibility for no less a thing than that the people of the United States, whose love of their country and whose loyalty to its government should unite them as Americans all, bound in honor and affection to think first of her and her interests, may be divided in camps of hostile opinion, hot against each other, involved in the war itself in impulse and opinion if not in action.

Such divisions amongst us would be fatal to our peace of mind and might seriously stand in the way of the proper performance of our duty as the one great nation at peace, the one people holding itself ready to play a part of impartial mediation and speak the counsels of peace and accommodation, not as a partisan, but as a friend.

I venture, therefore, my fellow countrymen, to speak a solemn word of warning to you against that deepest, most subtle, most essential breach of neutrality which may spring out of partisanship, out of passionately taking sides. The United States must be neutral in fact, as well as in name, during these days that are to try men's souls. We must be impartial in thought, as well as action, must put a curb upon our sentiments, as well as upon every transaction that might be construed as a preference of one party to the struggle before another.