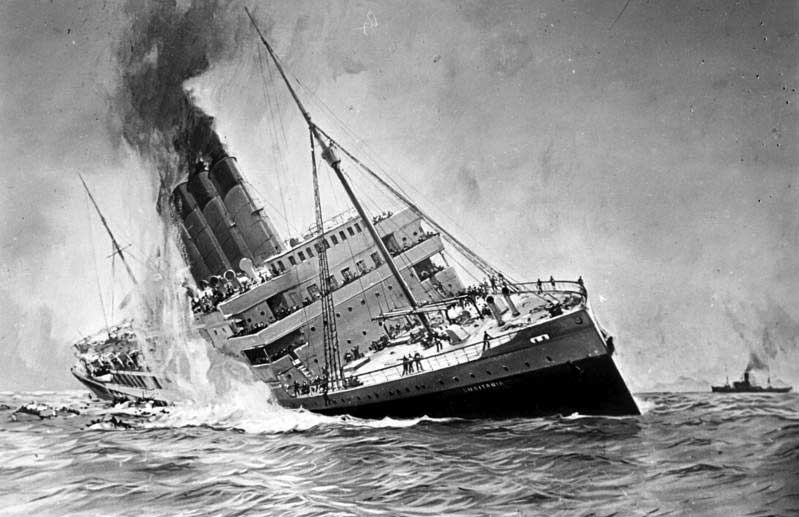 Among the 1,200 passengers of the liner Lusitania were 128 Americans citizens. The Lusitania was sunk by a German submarine. The sinking of the Lusitania poisoned relations between the United States and Germany, but did not immediately result in US intervention in the war.

World War I also did not stop the travel of Americans and Brits from crossing the Atlantic. The British Cunard line continued to sail its large liners between the Liverpool and New York. The RMS Lusitania was commissioned in 1907 and was the fastest liner in serviceable to maintain a speed of 25 knots. While the Germans had begun to use submarines against British shipping, the Lusitania was confident that it was fast enough to outrun any German sub. The British were buying a great deal of their arms from the United States and much of those arms sailed on passenger ships. The German Embassy in the US warned Americas that traveling on those ships could be dangerous.

1,265 passengers and a crew of 694 embarked on the ship when it departed New York's Pier 54 on May 1st, 1915. In addition to the passengers, the ship also carried in its freight holds munitions for Great Britain. As the boat was nearing the British Isles, the Royal Navy became concerned about its safety and sent destroyers to escort it. The ship refused to communicate with the Royal Navy, however, and the escorts ships never intersected with the ship. On April 30th the German Submarine U-20 left Borkum for the Irish Sea. She attacked a number of merchant ships sinking three of them. The British Admiralty knew she was operating off the coast of Ireland and warned all the ships. The captain of the Lusitania Captain William Turner took what he thought were prudent steps, closing watertight doors and preparing her lifeboats for launching in case there was a need.

By May 7th the captain of U-20 Walther Schwieger decided that since he was low on torpedoes to return home. At 12:45 while the submarine was surfaced lookouts spotted a ship on the horizon. It turned out to be a large merchant vessel- the Lusitania. Schwieger ordered the sub close on the target. When the Lusitania was 700 meters away, U-20 fired one torpedo. The torpedo hit below the bridge causing a massive secondary explosion. The captain ordered the ship to head for the Irish coast, but the engines could not respond. He soon ordered abandon ship- while the wireless operator sent out an SOS. The Lusitania sank 18 minutes after being struck by the torpedo. Of the 1,959 people aboard when the torpedo hit 1,195 were lost.