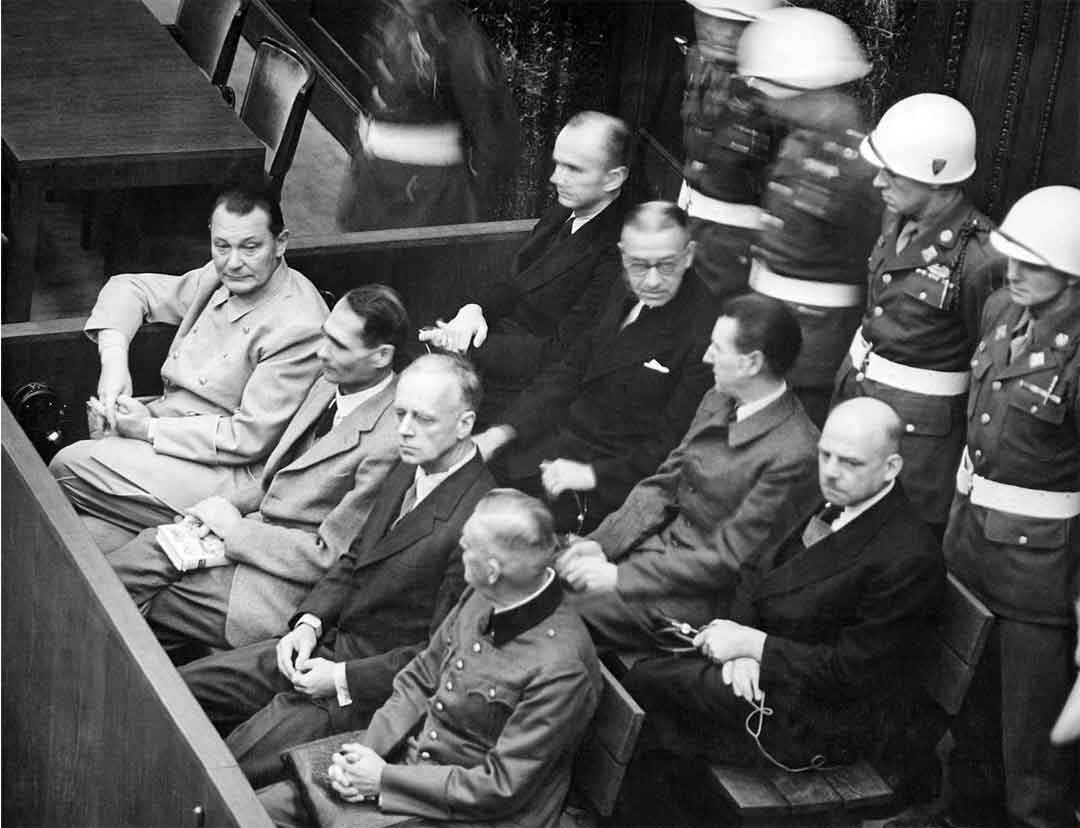 Nine of Nazi Germany's top leaders were hung at the end of their trials. They were accused of crimes "so calculated, so malignant, and so devastating, that civilization cannot tolerate their being ignored, because it cannot survive their being repeated." The crimes included the murder of at least six million European Jews.

Germany was different. On October 30, 1943, the Allies had issued the Moscow Declaration that warned the Germans that they would be responsible for their war crimes. The Allies had decided that if a war crime had been committed in a specific country, then the trial of those responsible would take place in that country. Those most responsible would be tried a tribunal organized together by the Allied powers, that became the Nurenberg Trial. Lower-ranking Nazis war criminals such as the guards and commanders of Concentration Camps like Bergen Belson were tried by military tribunals in the individual zones of occupation. Five thousand people were convicted of war crimes or crimes against humanity in the western occupation zones. Eight hundred were condemned to death, and 486 were executed.

The main event, however, was the Nurenberg Trials. Officially known as the International Military Tribunal, it was a creation of the London Charter that was agreed to by the great powers on August 8, 1945. The Tribunal was to decide on the "punishment of the major war criminals of the European Axis countries." The Soviets wanted the trial to take place in Berlin but agreed to have it in Nuremberg, in the western zone. Nurenberg had two advantages. First, the Palace of Justice had been spared from American bombs and was intact and even had a jail; second, Nuremberg was the symbolic home of Nazisim, where Hitler held his largest rallies.

A total of 200 German war criminals were tried at Nurenberg. However, the most famous was the first trial of the major war criminals, which took place between November 20, 1945, and October 1, 1946.

Each of the Major Power sent a judge, an alternative, and a prosecutor.

The court met for the first time on November 19 and indicted 24 war criminals and seven organizations.

Governor-General of the General Government in occupied Poland 1939–45.

Hermann Goring- Commander of the luftwaffe

Arthur Seuss-Inquart. Commissioner of the Netherlands

The trial opened on November 20, with the Chief Prosecutor Robert Jackson giving a long opening speech.

When Erwin von Lahousen testified that Keitel and von Ribbentrop gave orders for the murder of Poles, Jews, and Russian prisoners of war and when on3 January 1946: Witness Otto Ohlendorf, former head of Einsatzgruppe D, admits to the murder of around 90,000 Jews On January 7 former SS-Obergruppenführer Erich von dem Bach-Zelewski admits to the organized mass murder of Jews and other groups in the Soviet Union. And on January 28, 1946Marie-Claude Vaillant-Couturier, member of the French Resistance and concentration camp survivor, testifies on the Holocaust, becoming the first Holocaust survivor. And finally, Abraham Sutzkever testifies to the murder of almost 80,000 Jews in Vilnius by the Germans.

It was then the defense turn. Herman Goring took the stand in his defense. The Germans tried to shift the blame to the Soviets, and others said they were just following orders.

The prosecution and defense gave closing arguments in July, and the sentences were handed down on September 30 and October 1. Twelve of the Nazis were sentenced to death, seven received prison sentences (ranging from 10 years to life), and three were acquitted.

The death sentences were carried out on October 16, 1946, by way of hanging. Herman Goring escaped the hangman noose by committing suicide the night before,

While controversy remains on how the trial was conducted, it has served as a model for subsequent war trials. The Nurenberg trials established several essential principles of law and war; the most important of them is that the fact that a person acted pursuant to the order of his Government or a superior does not relieve him from responsibility under international law, provided a moral choice was, in fact, possible to him.

After the first set of trials was completed, the second Nuremberg trials began on December 9, 1946. The International Military Tribunal also held these trials. Those brought to trial were the doctors and enablers of Hitler's euthanasia program and those involved in medical experiments on prisoners. The trial ended on July 19, 1947, with death sentences handed down to seven of the twenty-three tried. Among those sentenced to death was Victor Brack, the Chief Administrator of Hitler's Chancellory and the overseer of the euthanasia programs. Also hung was Dr. Karl Brandt Hitler's personal physician and Minister of Health Dr. Karl Gebhardt, the Chief Surgeon of the SS.

A positive result of the trial was the issuance of the Nuremberg code that made it illegal under International Law to conduct medical experiments on prisoners.